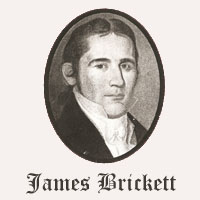 In 1762, Doctor Brickett established his medical practice in Haverhill, Massachusetts. Shortly thereafter, he began his medical career as a surgeon's mate in the French and Indian Wars.

On September 5, 1774, Captain James Brickett became the first captain to lead the Haverhill Artillery Company, and later led the 10th Massachusetts Volunteer Regiment at the Battle of Bunker Hill in the War for American Independence.

By 1776, Dr. Brickett was named Brigadier General with full command of the Massachusetts levies, leading his troops during the "sea battle" at Lake Champlain.

After Burgoyne's surrender at Saratoga on 17 October 1777, General Brickett was placed in command of the escort, and marched the prisoners, about 6,000 in number, from the battlefield on Hudson River to Cambridge, Massachusetts.

Dr. Brickett lived in Haverhill at his home pictured below, on the north side of Water Street, from 1762 until his death. 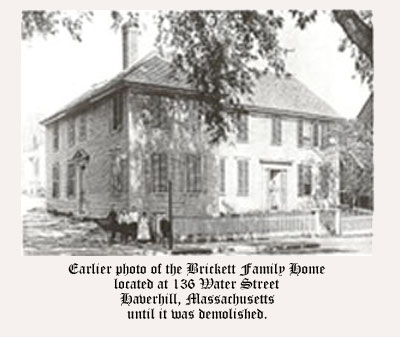 The Brigadier General James Brickett House was built on land purchased in 1764 from Widow Madger. The house was located at 136 Water Street, Haverhill, Massachusetts.

The left side was built for his son, Dr. Daniel Brickett (1761-1834), about the time he married. The room on the left side of the front door was used by Dr. James Brickett as his apothecary shop when he began his medical practice. The parlor on the right was the scene of many reunions of the officers of his brigade, General Brickett being the most prominent officer in this region after the Revolutionary War. The front parlor exhibited fine raised paneling which was removed when the house was demolished in 1938. The house remained in the Brickett Family until 1888, when it was sold to Israel Carleton whose heirs owned it until it was demolished. 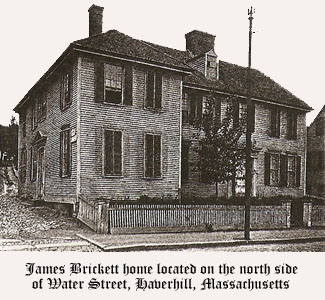 The grave of Brigadier General James Brickett was marked with a headstone by the DAR Chapter on 8 September 1996. The grave is located at the Pentucket Cemetery in Haverhill.

If you do not see a sidebar to the left
please click here to navigate this site.

Web hyperlinks to non-DAR sites are not the responsibility of the NSDAR,
the state organizations, or individual DAR chapters.